Consider the regular expression (x+x+)+y. Before you scream in horror and say this contrived example should be written as xx+y or x{2,}y to match exactly the same without those terribly nested quantifiers: just assume that each “x” represents something more complex, with certain strings being matched by both “x”. See the section on HTML files below for a real example.

Let’s see what happens when you apply this regex to xxxxxxxxxxy. The first x+ will match all 10 x characters. The second x+ fails. The first x+ then backtracks to 9 matches, and the second one picks up the remaining x. The group has now matched once. The group repeats, but fails at the first x+. Since one repetition was sufficient, the group matches. y matches y and an overall match is found. The regex is declared functional, the code is shipped to the customer, and his computer explodes. Almost.

If you try this regex on a 10x string in RegexBuddy’s debugger, it’ll take 2558 steps to figure out the final y is missing. For an 11x string, it needs 5118 steps. For 12, it takes 10238 steps. Clearly we have an exponential complexity of O(2^n) here. At 19x the debugger bows out because it won't show more than one million steps.

RegexBuddy is forgiving in that it detects it’s going in circles and aborts the match attempt. Other regex engines (like .NET) will keep going forever, while others will crash with a stack overflow (like Perl, before version 5.10). Stack overflows are particularly nasty on Windows, since they tend to make your application vanish without a trace or explanation. Be very careful if you run a web service that allows users to supply their own regular expressions. People with little regex experience have surprising skill at coming up with exponentially complex regular expressions.

Possessive Quantifiers and Atomic Grouping to The Rescue

In the above example, the sane thing to do is obviously to rewrite it as xx+y which eliminates the nested quantifiers entirely. Nested quantifiers are repeated or alternated tokens inside a group that is itself repeated or alternated. These almost always lead to catastrophic backtracking. About the only situation where they don’t is when the start of each alternative inside the group is not optional, and mutually exclusive with the start of all the other alternatives, and mutually exclusive with the token that follows it (inside its alternative inside the group). E.g. (a+b+|c+d+)+y is safe. If anything fails, the regex engine will backtrack through the whole regex, but it will do so linearly. The reason is that all the tokens are mutually exclusive. None of them can match any characters matched by any of the others. So the match attempt at each backtracking position will fail, causing the regex engine to backtrack linearly. If you test this on aaaabbbbccccdddd, RegexBuddy needs only 13 steps rather than millions of steps to figure it out.

However, it’s not always possible or easy to rewrite your regex to make everything mutually exclusive. So we need a way to tell the regex engine not to backtrack. When we’ve grabbed all the x’s, there’s no need to backtrack. There couldn’t possibly be a y in anything matched by either x+. Using a possessive quantifier, our regex becomes (x+x+)++y. This fails the 21x string in merely 7 steps. That’s 6 steps to match all the x’s, and 1 step to figure out that y fails. Almost no backtracking is done. Using an atomic group, the regex becomes (?>(x+x+)+)y with the exact same results.

Here’s a real example from a technical support case I once handled. The customer was trying to find lines in a comma-delimited text file where the 12th item on a line started with a P. He was using the innocently-looking regexp ^(.*?,){11}P.

The regex engine now checks whether the 13th field starts with a P. It does not. Since there is no comma after the 13th field, the regex engine can no longer match the 11th iteration of .*?,. But it does not give up there. It backtracks to the 10th iteration, expanding the match of the 10th iteration to 10,11,. Since there is still no P, the 10th iteration is expanded to 10,11,12,. Reaching the end of the string again, the same story starts with the 9th iteration, subsequently expanding it to 9,10,, 9,10,11,, 9,10,11,12,. But between each expansion, there are more possibilities to be tried. When the 9th iteration consumes 9,10,, the 10th could match just 11, as well as 11,12,. Continuously failing, the engine backtracks to the 8th iteration, again trying all possible combinations for the 9th, 10th, and 11th iterations.

You get the idea: the possible number of combinations that the regex engine will try for each line where the 12th field does not start with a P is huge. All this would take a long time if you ran this regex on a large CSV file where most rows don’t have a P at the start of the 12th field.

In our example, the solution is to be more exact about what we want to match. We want to match 11 comma-delimited fields. The fields must not contain comma’s. So the regex becomes: ^([^,\r\n]*,){11}P. If the P cannot be found, the engine will still backtrack. But it will backtrack only 11 times, and each time the [^,\r\n] is not able to expand beyond the comma, forcing the regex engine to the previous one of the 11 iterations immediately, without trying further options.

See the Difference with RegexBuddy 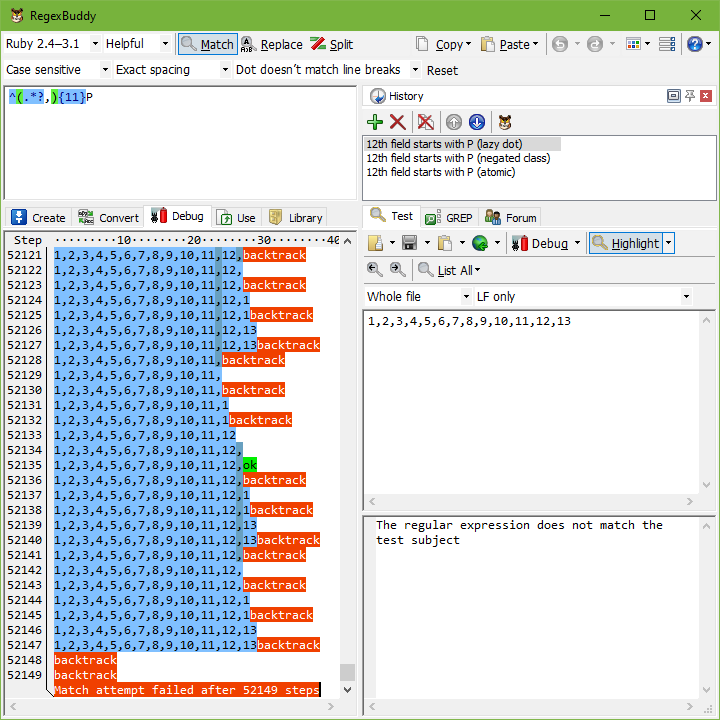 Our improved regex ^([^,\r\n]*,){11}P, however, needs just 52 steps to fail, whether the subject string has 12 numbers, 13 numbers, 16 numbers or a billion. While the complexity of the original regex was exponential, the complexity of the improved regex is constant with respect to whatever follows the 11th field. The reason is the regex fails almost immediately when it discovers the 12th field doesn’t start with a P. It backtracks the 11 iterations of the group without expanding again.

The complexity of the improved regex is linear to the length of the first 11 fields. 24 steps are needed in our example to match the 11 fields. It takes only 1 step to discover that P can’t be matched. Another 27 steps are then needed to backtrack all the iterations of the two quantifiers. That’s the best we can do, since the engine does have to scan through all the characters of the first 11 fields to find out where the 12th one begins. Our improved regex is a perfect solution. 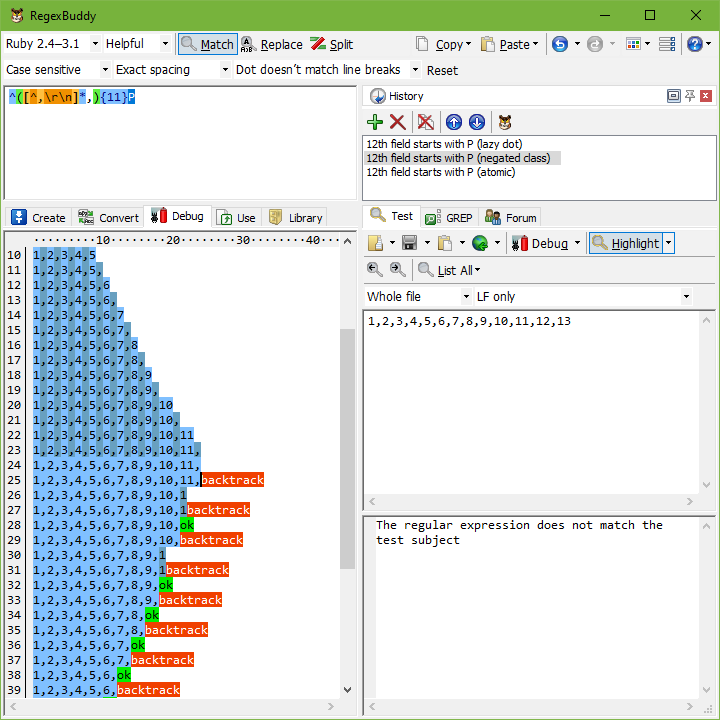 In the above example, we could easily reduce the amount of backtracking to a very low level by better specifying what we wanted. But that is not always possible in such a straightforward manner. In that case, you should use atomic grouping to prevent the regex engine from backtracking.

Now, the engine leaves the atomic group. Because the group is atomic, all backtracking information is discarded and the group is now considered a single token. The engine now tries to match P to the 1 in the 12th field. This fails.

So far, everything happened just like in the original, troublesome regular expression. Now comes the difference. P fails to match, so the engine backtracks. But the atomic group made it forget all backtracking positions. The match attempt at the start of the string fails immediately.

If you test the final solution in RegexBuddy’s debugger, you’ll see that it needs the same 24 steps to match the 11 fields. Then it takes 1 step to exit the atomic group and throw away all the backtracking information. Discovering that P can’t be matched still takes one step. But because of the atomic group, backtracking it all takes only a single step.

Suppose you want to use a regular expression to match a complete HTML file, and extract the basic parts from the file. If you know the structure of HTML files, it’s very straightforward to write the regular expression <html>.*?<head>.*?<title>.*?</title>.*?</head>.*?<body[^>]*>.*?</body>.*?</html>. With the “dot matches newlines” or “single line” matching mode turned on, it will work just fine on valid HTML files.

If you run this regex in RegexBuddy’s debugger, the output will look like a sawtooth. The regex matches the whole file, backs up a little, matches the whole file again, backs up some more, backs up yet some more, matches everything again, etc. until each of the 7 .*? tokens has reached the end of the file. The result is that this regular has a worst case complexity of N^7. If you double the length of the HTML file with the missing <html> tag by appending text at the end, the regular expression will take 128 times (2^7) as long to figure out the HTML file isn’t valid. This isn’t quite as disastrous as the 2^N complexity of our first example, but will lead to very unacceptable performance on larger invalid files.

In this situation, we know that each of the literal text blocks in our regular expression (the HTML tags, which function as delimiters) will occur only once in a valid HTML file. That makes it very easy to package each of the lazy dots (the delimited content) in an atomic group.

<html>(?>.*?<head>)(?>.*?<title>)(?>.*?</title>)(?>.*?</head>)(?>.*?<body[^>]*>)
(?>.*?</body>).*?</html> will match a valid HTML file in the same number of steps as the original regex. The gain is that it will fail on an invalid HTML file almost as fast as it matches a valid one. When </html> fails to match, the regex engine backtracks, giving up the match for the last lazy dot. But then, there’s nothing further to backtrack to. Since all of the lazy dots are in an atomic group, the regex engines has discarded their backtracking positions. The groups function as a “do not expand further” roadblock. The regex engine is forced to announce failure immediately.

Essentially, what we’ve done is to bind a repeated regex token (the lazy dot to match HTML content) to the non-repeated regex token that follows it (the literal HTML tag). Since anything, including HTML tags, can appear between the HTML tags in our regular expression, we cannot use a negated character class instead of the lazy dot to prevent the delimiting HTML tags from being matched as HTML content. But we can and did achieve the same result by combining each lazy dot and the HTML tag following it into an atomic group. As soon as the HTML tag is matched, the lazy dot’s match is locked down. This ensures that the lazy dot will never match the HTML tag that should be matched by the literal HTML tag in the regular expression.