Most modern regex flavors support a variant of the regular expression syntax called free-spacing mode. This mode allows for regular expressions that are much easier for people to read. Of the flavors discussed in this tutorial, only XML Schema and the POSIX and GNU flavors don’t support it. Plain JavaScript doesn’t either, but XRegExp does. The mode is usually enabled by setting an option or flag outside the regex. With flavors that support mode modifiers, you can put (?x) the very start of the regex to make the remainder of the regex free-spacing.

In free-spacing mode, whitespace between regular expression tokens is ignored. Whitespace includes spaces, tabs, and line breaks. Note that only whitespace between tokens is ignored. a b c is the same as abc in free-spacing mode. But \ d and \d are not the same. The former matches  d, while the latter matches a digit. \d is a single regex token composed of a backslash and a “d”. Breaking up the token with a space gives you an escaped space (which matches a space), and a literal “d”.

Likewise, grouping modifiers cannot be broken up. (?>atomic) is the same as (?> ato mic ) and as ( ?>ato mic). They all match the same atomic group. They’re not the same as (? >atomic). The latter is a syntax error. The ?> grouping modifier is a single element in the regex syntax, and must stay together. This is true for all such constructs, including lookaround, named groups, etc.

Exactly which spaces and line breaks are ignored depends on the regex flavor. All flavors discussed in this tutorial ignore the ASCII space, tab, line feed, carriage return, and form feed characters. JGsoft V2 and Boost are the only flavors that ignore all Unicode spaces and line breaks. JGsoft V1 almost does but misses the next line control character (U+0085). Perl always treats non-ASCII spaces as literals. Perl 5.22 and later ignore non-ASCII line breaks. Perl 5.16 and prior treat them as literals. Perl 5.18 and 5.20 treated unescaped non-ASCII line breaks as errors in free-spacing mode to give developers a transition period.

XPath and Oracle do not support comments within the regular expression, even though they have a free-spacing mode. They always treat # as a literal character.

Putting it all together, the regex to match a valid date can be clarified by writing it across multiple lines: 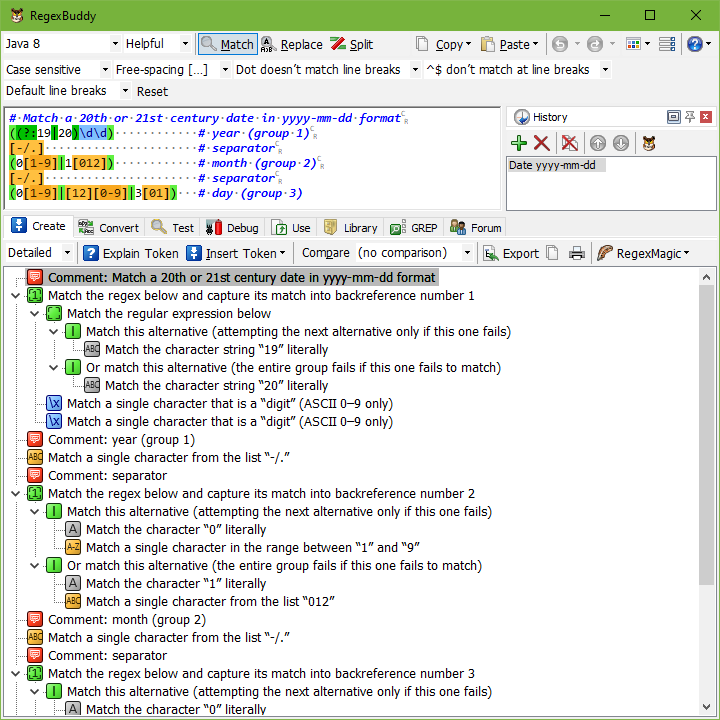 Many flavors also allow you to add comments to your regex without using free-spacing mode. The syntax is (?#comment) where “comment” can be whatever you want, as long as it does not contain a closing parenthesis. The regex engine ignores everything after the (?# until the first closing parenthesis.